Performing our politics live, for each other, carving out online space away from systems of imperial fixity, and towards skill sharing, fluidity and multiplicity. Participants are enabled to embrace literary freedom: riffing off, imagining, rejecting or rephrasing the original text in this form of active poetry.

Working from the position of an *open feminism that embraces multiplicity, diversity, queerness, ephemeral becoming, transforming, shifting - making space for underrepresented voices and not privileging our voices in relation to others – nor doom scrolling but instead affirmative feeling through sentences, and dancing words with other people. Through this performative exploration we are seeding the ground of diverse feminist traditions of knowledge production. 10 working draft points - propositions - expand in each iteration, together with local and remote presences.
Why?
Carving out online space that is fluid and wayward, experimentally through deciphering, interpreting, trying, failing, and blossoming. Indeterminate writing is an act of care, mediation and healing, by deploying networked tools away from tactics of control, other kinds of knowledge exchange and voices to arise and intermingle in this space of possibility.

🐚 Steps to prepare 🐚
You'll need an internet-connected computer device, witha monitor and keyboard, installed with Chrome Browser
Requirements: willingness to work collectively, have a tolerance for ambiguity, respect for our *CODE OF CONDUCT*

We’ll meet here, then we move to a multiple author writing pad - Etherpad - a tool for public collaboration.

We will share a URL on the day and time of the event in Jitsi.
CODE of CONDUCT 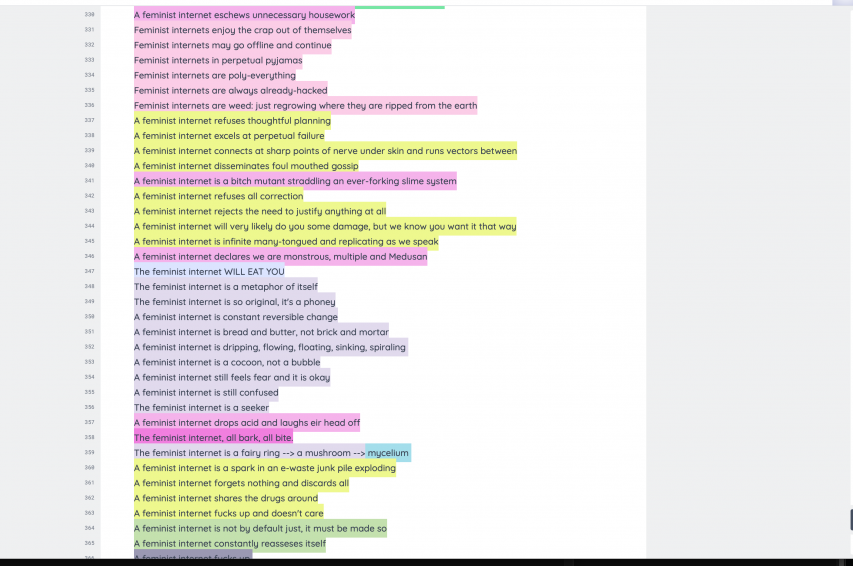 This work is licensed under a Creative Commons Attribution-NonCommercial-ShareAlike 4.0 International License.

Writing the Feminist Internet (WtFI) a 2 hour collaborative writing session inviting participants to engage in expanding upon a draft set of ‘10 arbitrary working points’ to swell the imagination of what a feminist internet is, and what it could become. A springboard for participants to remap, reconfigure, edit, redefine in a situated performative writing act in relation to one another. Invited to initially meet on Jitsi (an open-source video platform) an antechamber before ‘opting in’. An acknowledgment by the hosts via a speech with accompanying cue cards: to the guests, hosts and ghosts: ancestors past, present and emerging: the country the WtFI server sits on, and the spaces that they occupying which are conceivably in themselves colonised, written, programmed and ruled by dominant other’. Subsequently the hosts usher the participants by the instruction to copy URL placed the chat element of the Jitsi, in their browser address bar. Moving from the antechamber through to main stage, to arrive at the location of the main event a purposely configured Etherpad, an open-source text editor for real time multiple authoring. Here a ‘code of conduct’ is bestowed and technical ‘How To’ preamble is delivered by the host, typewriting the information in real time for the participants to read and sign. The transition from communicating via audio/visual streaming, to reading and writing in a collaborative network space, enable participants to make a perceptual shift, to tacitly engage with writing and reading even as they read. The purpose of the collaborative performance activity Writing the Feminist Internet (2020) is to pose broader questions about the convergence of theory, art practice and feminist waves to ‘do whatever we know how to order it to perform’ (Lovelace cited in Menabrea [1842] n.d). It probes at the edge of Internet spaces that are often occupied by those who point to complacency in engagement with networking systems, by drawing auxiliary attention to the apparatus. A motif of fourth wave feminism, it sheds light on the valences and bedlam of technopolitics that circulate beneath the surface of the interface and reflects on the call for ‘hybrid of feminist activist efforts’ noted by Emma A. Jane, positing towards ‘a recalibrated approach to collectivism’ (Jane 2015, 285) to give rise to a vast communal realm for the expression of alterities. In building upon the feminist ‘wave’ metaphor there is acknowledgement that the undercurrents of nautical lineages come to endure through ‘debt, or inheritance’ (Clarke Mane 2012, 78) more often than a confluence of flows. The findings of the activity often reveal that the potency of the mutable ‘10 working points’ lies in their indeterminate stance, where new meanings and enunciations can brew and be read as a source of critical and aesthetic ambiguity, amongst the highly revered principles of disarray, pandemonium and incompleteness. Informed by the epistemologies of intersectional and fourth wave feminism (Clarke Mane 2012; Jane 2015) to depict the embodied, situated, inexorable, cherished, and radical ways in which the performance enabled participants to conduct provocative frolics on the front lines of text.

Over the past three decades computer culture has generated numerous discourses, most conspicuously in the context of copyright licencing, opensource software, and deterministic automation. Expanding upon the ‘dark social’ to be chthonic can be considered both a critique of the usual instrumental perception of computation, and a metaphor to elucidate the abundant convergence of exchange as a stirring prolific space, oriented towards profusion. This vast idea of modern computation was first articulated almost two centuries ago by Ada Lovelace, whose depiction of computing capabilities contained transcendental and symbolic ‘Notes’ (cited in Menabrea [1842] n.d). This proposition contends that below layers of obfuscation her revelations endure in the emergences of bio-technical-cultural transformations of the twenty first century. One example is the interpretation of Lovelace’s visions in line with computer programmer Ted Nelson who coined ‘hypertext’ and speaks of programming as a ‘weaving of plans of events (and where they are to take place) – the choreography of happenings’ (Nelson 1987, 40). This intertwining of people converging amidst temporalities and hemispheres enabled through a composition of computational networks and webserver software has become a common daily ritual for many of us. It is recommended that the WtFI is hosted on an Etherpad preferably hosted on an autonomous feminist server run server.

The based The ’10 draft working points’ may be prepared by the hosts in advance – comments on computer subcultures, they may consist of ethnographic participation and observation, be informed by feminist genealogies that are spectral and manifold, illuminating the plurality agendas that constitute computer mediated interaction. *advance a chthonic feminist critical internet theory, first and foremost kindled by the edicts of science fiction writer Ursula LeGuin who instructs, ‘Don't look straight at the sun. Go into a dark bar for a bit and have a beer with Dionysius, every now and then’ (Le Guin 1976, xvii). The chthonian is a locus that refers to ‘that which is beneath the surface, the underworld and its state of darkness’ (Fontelieu 2020, n.p.). It can also be acknowledged as analogous to feminist computer subcultures, those whose activities frequently occur under the radar of sanctioned culture. A key tactic for proposing the term chthonic is to reorient enquiry towards the murkier side of feminist webserver peer production, in order to counterpose such tendencies of how the ‘adjective “dark” may bring to mind illegal or immoral activity’ (Gehl and McKelvey 2019, 223). Darkness is routinely deemed as the symbol of using power for personal gain or ‘evil’ nevertheless a chthonic deity, ‘the carrier of the projection of human nature’s instinctive drives and dark, rejected propensities… is also a fertile and divine source of abundance (Fontelieu 2020, n.p.).’ In this way, the Internet is envisioned as a ‘dark social space’ (Heemsbergen et.al. 2021, n.p.) as place, where culture and speculative realism, fiction and imagining invoke a potent understanding of the complexities of these ontologies in the conception of a chthonic feminist critical theory.**